Students say “Why Europe Matters” to them 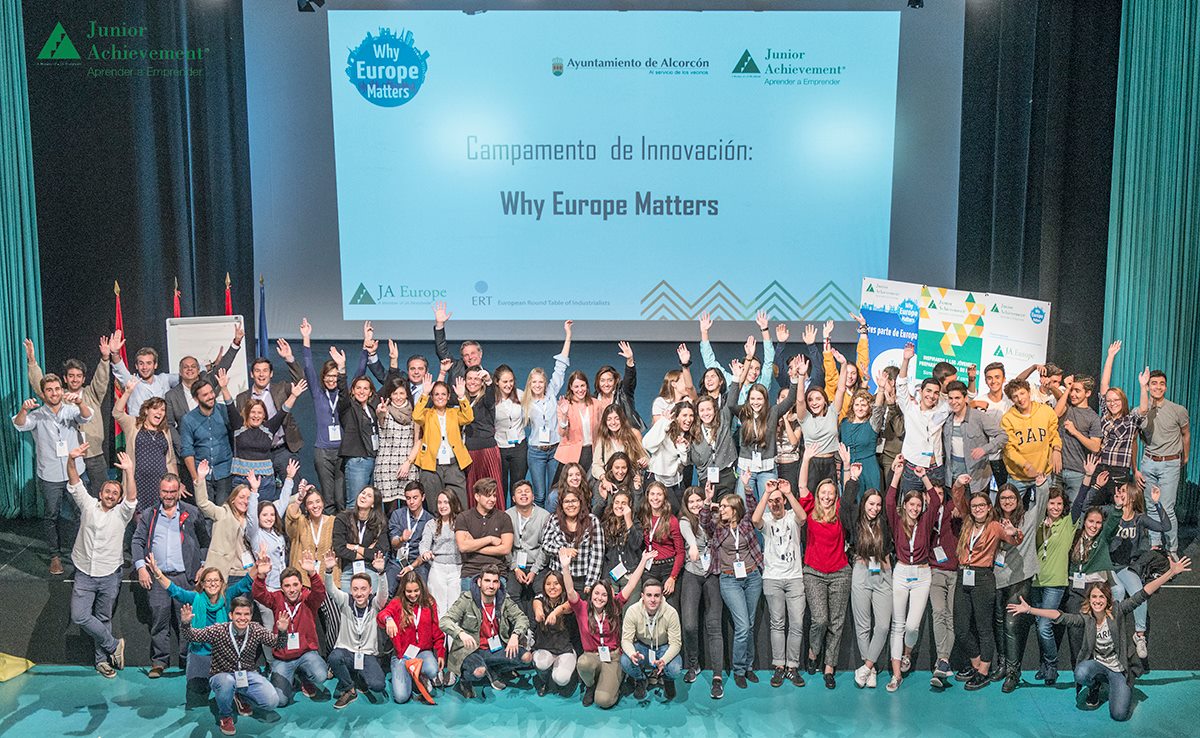 During November 150 students from 26 schools brainstormed in workshops in three Member States to come up with answers to some of Europe’s most intractable questions. How can we improve domestic waste recycling rates? Students in Spain thought that the best recyclers should be rewarded with discounted prices on new goods. How can Europe attract high quality investment from major international companies? One way, suggested Dutch students, would be to ensure that vocational training was tuned locally to the actual needs of the inward investor. How can social cohesion be improved? Hungarian students proposed adding a weekly class to the school curriculum that helps students to understand how to overcome uneasiness around people with physical or other differences. These with other outcomes from workshops in 10 Member States will be debated with Europe’s policymakers at a major conference in Brussels in March.

The workshops throwing up these ideas are not isolated events. In fact they are part of a wide-ranging survey of up to 10,000 young Europeans. The survey has similarities with the Committee of the Regions’ initiative ‘Reflecting on Europe.’ The first of its kind, ‘Why Europe Matters’ is funded by a consortium led by the European Round Table of Industrialists and JA Europe. In the last four months of 2017, an online survey (available at www.whyeuropematters.eu/survey/) invites Europeans aged between 16 and 25 to express opinions on issues of concern to them. The survey will be published in the first quarter of 2018 following analysis by the Eastern Norway Research Institute. In parallel policy proposals are being developed in workshops. The best of them will be presented at the March conference. At this event key EU decision takers will engage with participants and develop recommendations for policy.

The workshops are designed to discover and draw out young people’s thoughts, their expectations, and their dreams about the European Union. It is nothing less than a sustained effort to find out ‘why Europe matters’ to young Europeans. But it is not merely an opinion poll. For JA Europe and the European Round Table, the intention is that the project has meaningful outcomes. That is why the workshops have been designed to generate concrete proposals for policymakers to consider.

This is one of the ways in which ‘Why Europe Matters’ breaks new ground for young Europeans but it does so in other ways as well. First: major companies participate in the workshop and they do so actively. In Spain, 19 representatives from six companies acted as ‘mentors’ working alongside students in their workshops. A further seven business representatives served as ‘jurors’ drawing up a short list of winning proposals. Bringing business and schools together in this way helps students to understand the ways of business. It also allows business to learn more about the young Europeans making up their next employees and customers. In addition including teachers in the mix (there were five present in Spain) ensures that workshop learnings are not just for the event itself but made available to schools, through their students and staff, in the years to come.

Second: the workshops encouraged a focus on three major European issues and participants responded with a range of proposals. Some of these proposals endorsed policy ideas already the subject of public debate but others were genuinely innovative. Innovative, too, were references to social media as the means of choice to inform and to communicate with young people. The three issues were youth unemployment, environmentally sensitive energy, and migration which, by the way, were amongst the top issues of concern for respondents to the Committee of the Regions’ survey ‘Reflecting on Europe.’

Dutch students supported calls for more contact in their final year with prospective employers. They wanted to see further opportunity for vocational and other training to improve their employability. They thought an app connecting companies, workers and training centres would add value. To build environmental awareness, Spanish students suggested a legally-enforceable maximum monthly electricity consumption level for each home with bonuses for owners not exceeding it. They were also keen to see a new subject taught in schools: ‘recycling routines.’ They suggested that an app to improve sales of fruits and vegetables. The Dutch wondered whether emissions from factories could be used for greenhouses whose plants or waste materials would be returned to factories as fuel. The Hungarians suggested solar panels on roads and more car sharing to reduce urban pollution. On migration, the Spanish hoped that refugees could be settled in underpopulated rural areas with a sustained effort to ensure social integration. The Hungarians asked for a supra-national organisation to help migrants find a location best suited to their skills, experience, and future plans. All the proposals were interesting and, even if they were not always readily practicable, they were without exception stimulating and suggestive.

Third and perhaps most important: participation in the workshops clearly helped the students. In the Netherlands one said that “I learned to think creatively and brainstorm about problems in Europe.” Another commented: “I learned to look at problems in a different way.” A third student drew attention to the role of business in the event: “it was a great feeling to see how interested the people of BASF and Heineken were in our stories and the solutions we came up with.”
For JA Europe and the European Round Table, it is this sense of mutual engagement between business representatives and students that at this stage of ‘Why Europe Matters’ is the workshop outcome of real and enduring value. This is because ‘Why Europe Matters’ is part of the ‘Switch on Europe!’ campaign, which promotes entrepreneurship education as a critical component of formal school curricula, and entrepreneurship education is best delivered as a partnership between schools and business.

Early signs from the ‘Why Europe Matters’ survey suggests that learning “to look at problems in a different way” is accelerating by bringing entrepreneurship education into the classroom. We will know more about this when the survey is published early in 2018. For the moment we can see evidence emerging that indicates that many students experiencing entrepreneurship education reap significant benefits. Not only do they “look at problems in a different way” but also they tend to apply themselves more rigorously to their school work overall. In this way the impact is much deeper and broader than on entrepreneurship inclination alone.

These workshops from three Member States form part of a series from which the best policy proposals will be chosen for debate with Europe’s policymakers at the March conference. With a workshop already having taken place in Bulgaria, there are six more to go. We wish them good luck in their discussions and we wait impatiently for the outcomes!